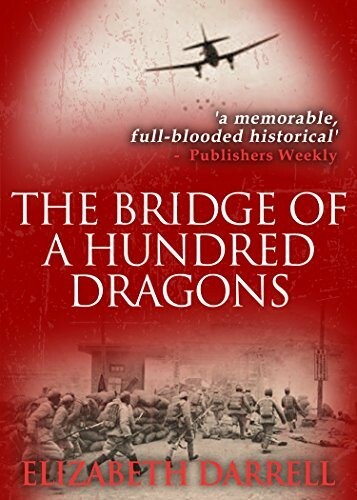 Based on true accounts and memoirs of the Shanghai emergency of 1927, THE BRIDGE OF A HUNDRED DRAGONS is a gripping story of love, heroism and tortured human relationships set against the background of an exotic and mysterious country. It was originally written under the pen name Emma Drummond.

Shanghai, 1927.  Major Mark Rawlings is sent to Shanghai to investigate the collapse of an isolated railway bridge. From the moment Alexandra Mostyn, aspiring painter and emancipated Bright Young Thing of 1920s Shanghai society, literally bumps into Major Rawlings, she starts to learn what it is to suffer. Mark is haunted by terrible memories of the Russian Civil War and of the beautiful woman he loved and lost. In Shanghai, he comes under extreme pressure from Alexandra’s ruthless father to falsify his report, and at the site of the bridge itself has to contend with a violent colleague, and hostile coolies who believe that the place is protected by legendary dragons. As Mark struggles to complete the bridge, he has to fight his attraction for Alexandra, who alternately angers and delights him. With the reappearance in his life of Marie, and aristocratic Russian emigrée, he finds himself painfully torn between the rival claims of his past and present loves. But personal troubles are swept aside as the three are tragically caught up in the rapid advance of the Kuomintang revolutionary army and violence intrudes shockingly on all their lives.