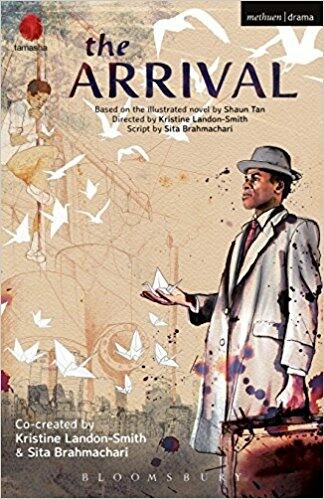 A moment of kindness in a sea of unfamiliarity… A long, hard day at work… A lively party… A nostalgic lullaby…

The story begins in Nigeria where the character of Dele plays a last game of football with his friends and says goodbye to his son Chidi, telling him he will send for him. He then embarks on a voyage where he meets strangers along the way carrying their own stories of upheaval, struggle and hope – sharing his dream to make their home in a new city and be joined by their families. Dele’s journey melds with the present day. In an inner-city hostel, Dele is an old man being looked after by Tian Mey, his carer. He reflects the past and his journey to where he is now and his story intertwines with the other migrants, both in his memories of the journey and the present-day reality of the hostel.

Based on the illustrated novel by Oscar winner Shaun Tan, one man’s tale echoes the many ‘arrivals’ happening around us all the time. This epic migration story unfolds through an extraordinary weaving together of theatre, circus and music. The Arrival tells the age-old story of immigration that is universal across peoples of diverse histories, countries and cultures.

How does it feel to say goodbye to your children, not knowing if you'll ever see them again? To arrive in a country where you're seen as an alien? To find yourself picking lettuce or sieving for cockles in order to survive?

This co-production between Tamasha and Circus Space, inspired by Shaun Tan's graphic novel, captures the confusions of immigration very well. It's a beautifully understated show that encompasses many kinds of language: physical, musical and emotional.

In this story of loss and longing, focusing on the story of a man from Nigeria who leaves his son behind and sails across the sea to an unknown country, Sita Brahmachari's pared-down script takes a supporting role. Felix Cross's score provides a constant emotional undertow, and circus techniques are neatly woven into the action. One scene features the man's son perching on a tree (represented by a vertical Chinese pole), where his departing father cannot reach him physically or emotionally; a slack wire threaded with fairy lights hints at a moment of community between the immigrants who have recently arrived.

This is not a show for those who want their theatre neatly tied up, or characters whose psychological motivations can be unpicked: instead, taking its cue from Tan's haunting monochrome illustrations, it creates images, moods and associations.

The show tries very hard, and Kristine Landon-Smith's production often succeeds, although it leaves you wanting more than can be delivered in an hour. But it's a distinctive piece, full of ideas about how to integrate theatre and circus, which slyly creeps up on you and seizes your heart.