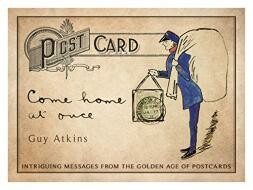 For more than a decade, Guy Atkins has collected postcards sent by the Edwardians. In this incredible treasury of 100 cards, he shares the very best from his collection. From the tantalising, to the hilarious, to the downright shocking, this compendium shines a light on an extraordinary phenomenon of communication.
At half the price of sending a letter, and with same-day delivery in urban areas, Britain became obsessed with the postcard between 1902 and 1914. By the outbreak of the First World War, the Post Office was delivering close to a billion cards a year. In fact, the speedy delivery meant Edwardian postcards were the text messages of their day!
Come Home at Once presents an intriguing piece of social history. In it, Guy explains just what made the postcard such an Edwardian sensation, what it really meant to tilt your stamp and how same-day delivery made Edwardian postcards completely different from the postcards we know today.
Published today by Bantam Press, it would make a fantastic gift for Christmas!